The Air Jordan 4 was released by Nike Sportswear in 1989 for the first time and designed by Tinker Hatfield. The Basketball in which Michael Jordan won its next Scoring title featured an Air Unit in the heel and straps on the side panel for increased ankle support. After Spike Lee took part in the Air Jordan 3 commercials, he was also featured in the commercials for the Air Jordan 4. He even dedicated a scene in his movie “Do the right thing” to the legendary shoe. The most popular colorways of the Air Jordan 4 are definitely the White Cement, Military Blue, Mars Blackmon & Bred. Since this style is one of the best sneakers ever among many sneaker fans, it is not surprising that artists, stores and designers were allowed to create their own creation on the Air Jordan 4 silhouette. 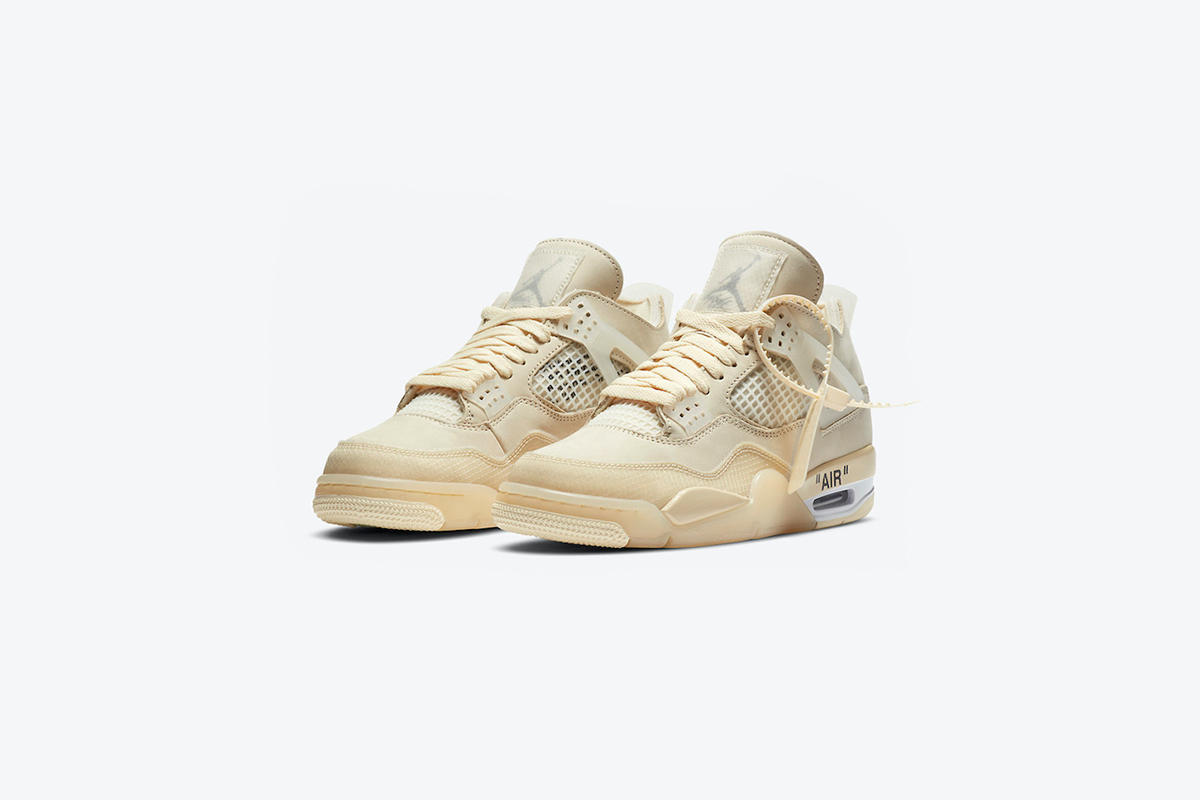 In 2020 Virgil Abloh presented us the OFF-WHITE x Air Jordan 4 "Sail" - another collaboration between the French designer and the Jumpman. The cream-colored sneaker lives up to the brand name "OFF-WHITE". Apart from a small part of the midsole, the Air Jordan 4 is completely monochrome. Even the hang tag has the same color and the OFF-WHITE zip tie comes in an off white color scheme as well. All in all, a very well-tuned sneaker, just like you know it from Virgil Abloh and the Nike/Air Jordan collaborations. 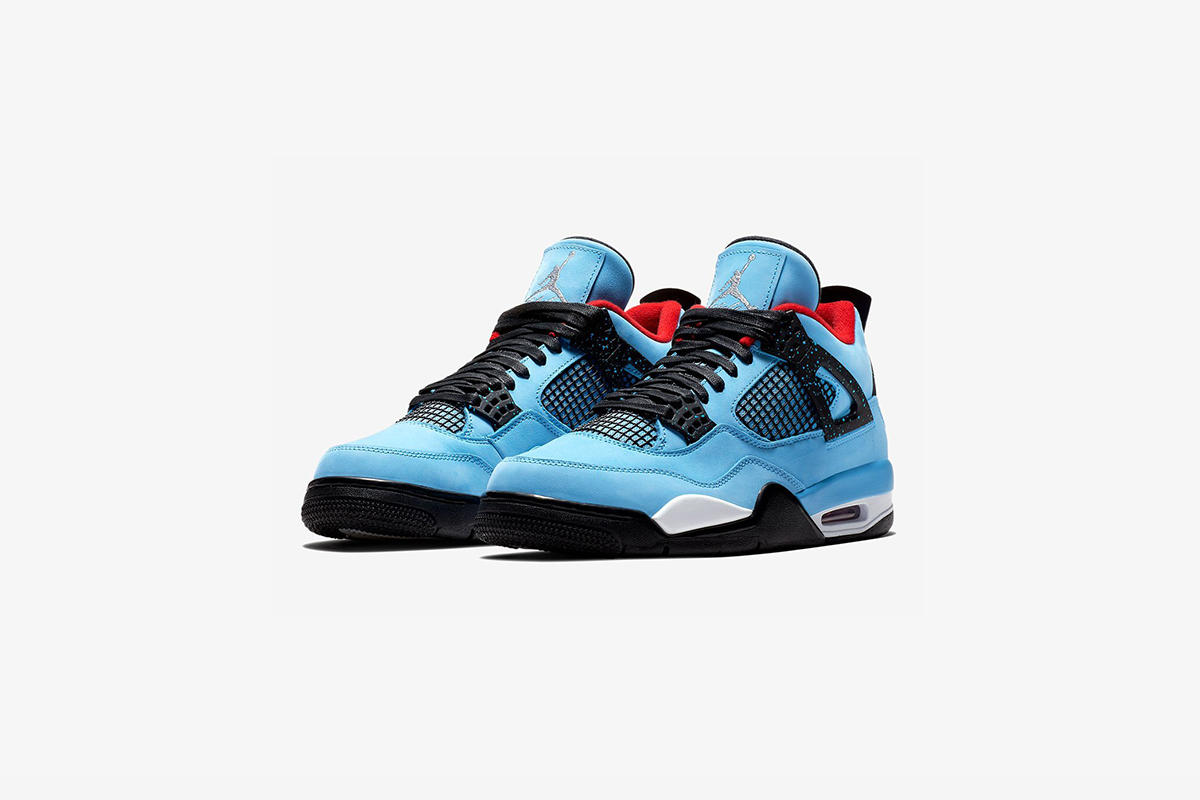 Travis Scott a.k.a. La Flame dedicates the Travis Scott x Air Jordan 4 to his hometown Houston and the football team. The colors are based on the old jerseys of the team. They used to wear jerseys exactly in the light blue and the red. Typical for the Air Jordan 4, premium materials were used here as well. A special highlight on this sneaker is the "Cactus Jack" logo on the left heel and the "Travis Scott" patch on the inside of the tongue. 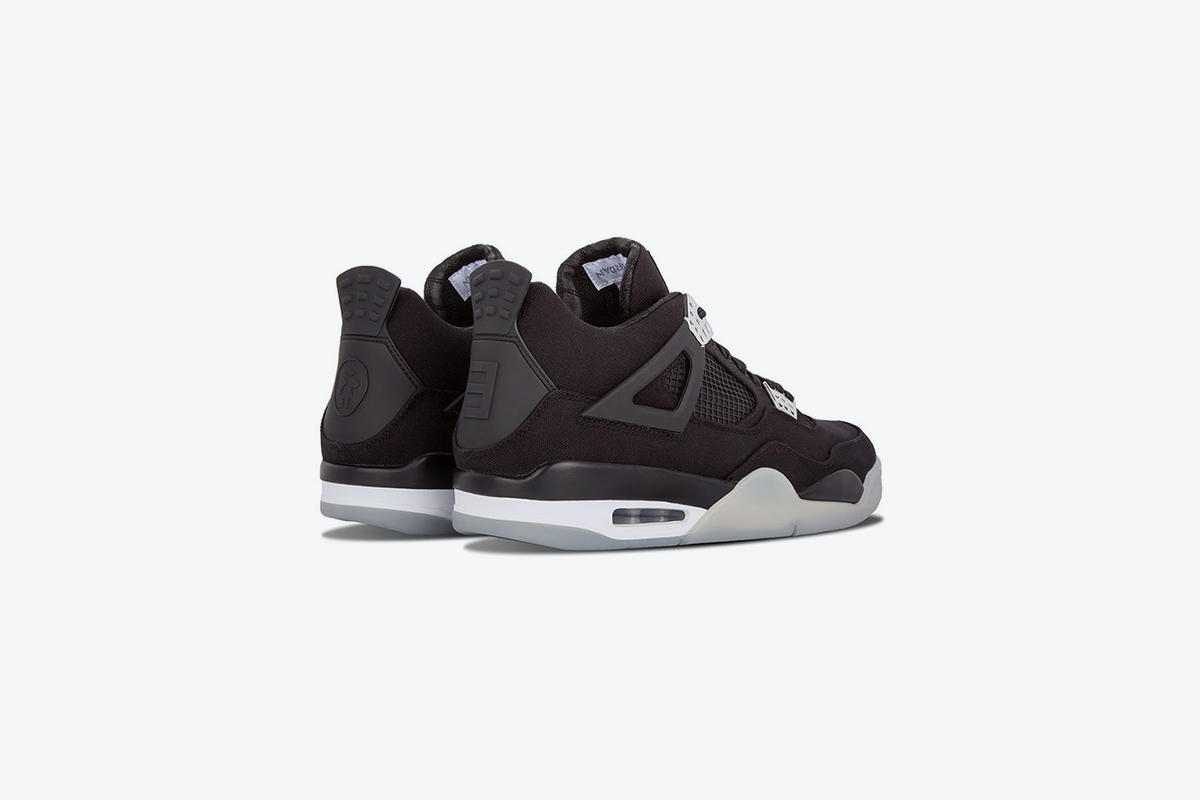 At first glance this pair does not look spectacular, but this black version of the Air Jordan 4 is one of the rarest pairs in the series. The Eminem x Carhartt x Air Jordan 4 was in fact a "Friends and Family" release in 2015. In addition, the sneaker could only be purchased at a charity auction. The upper of the sneaker is made of high quality canvas by Carhartt and instead of the Jumpman logos on the heel you find a "Jason" field hockey mask and the flipped Eminem "E". The pair of Eminem x Carhartt x Air Jordan 4 can be purchased on the aftermarket for more than 20.000€. 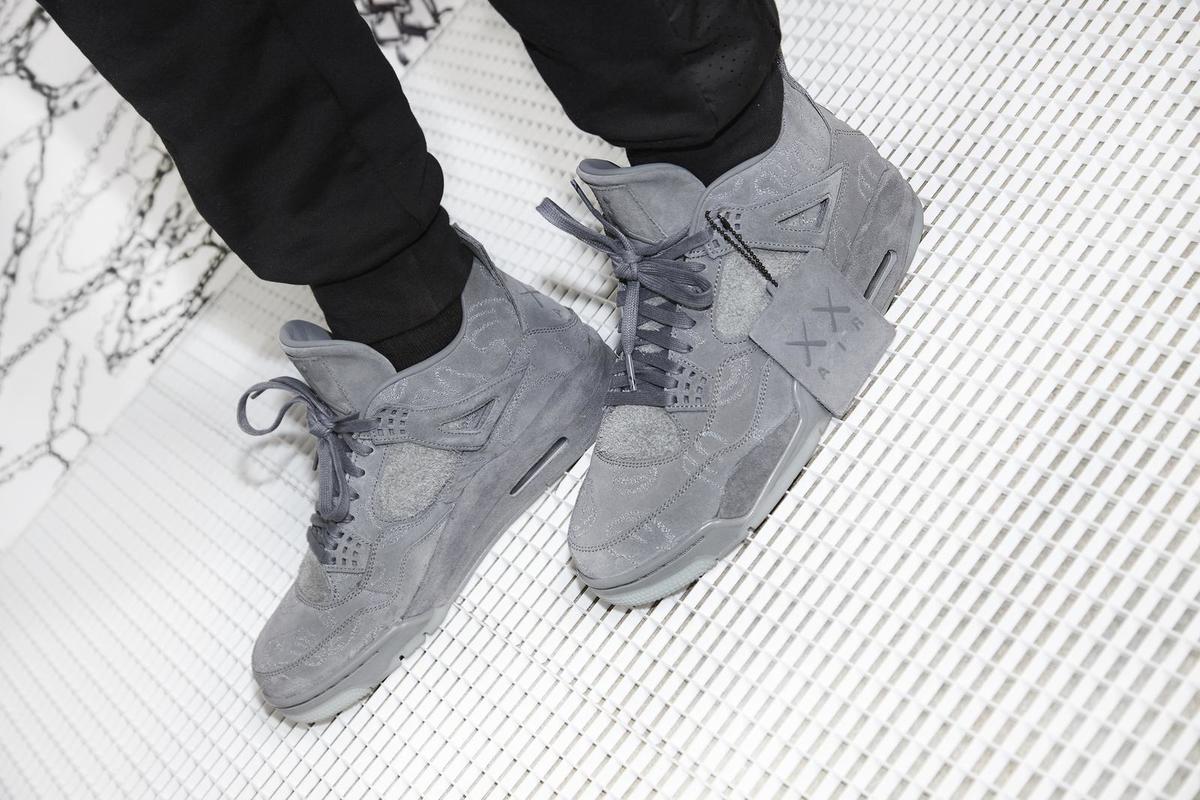 KAWS has been no stranger to the scene for years and the "X X" has now became popular in the mainstream. In 2017 the artist showed us his creation of the Air Jordan 4 – a version completely made of grey suede. Even the shoelace holders and the hang tag were made of suede. And instead of the Jumpman on the heel, the Air Jordan logo was replaced by the "X X". Another highlight of the KAWS x Air Jordan 4 can only be seen in the dark. Kaws and Air Jordan chose to have a Glow-in-The-Dark outsole. A sole just like we know it from the Nike Air Yeezy series. To top it all off, the same year they added another version of the KAWS x Air Jordan 4, which was adopted the same concept. This time the upper came in black. 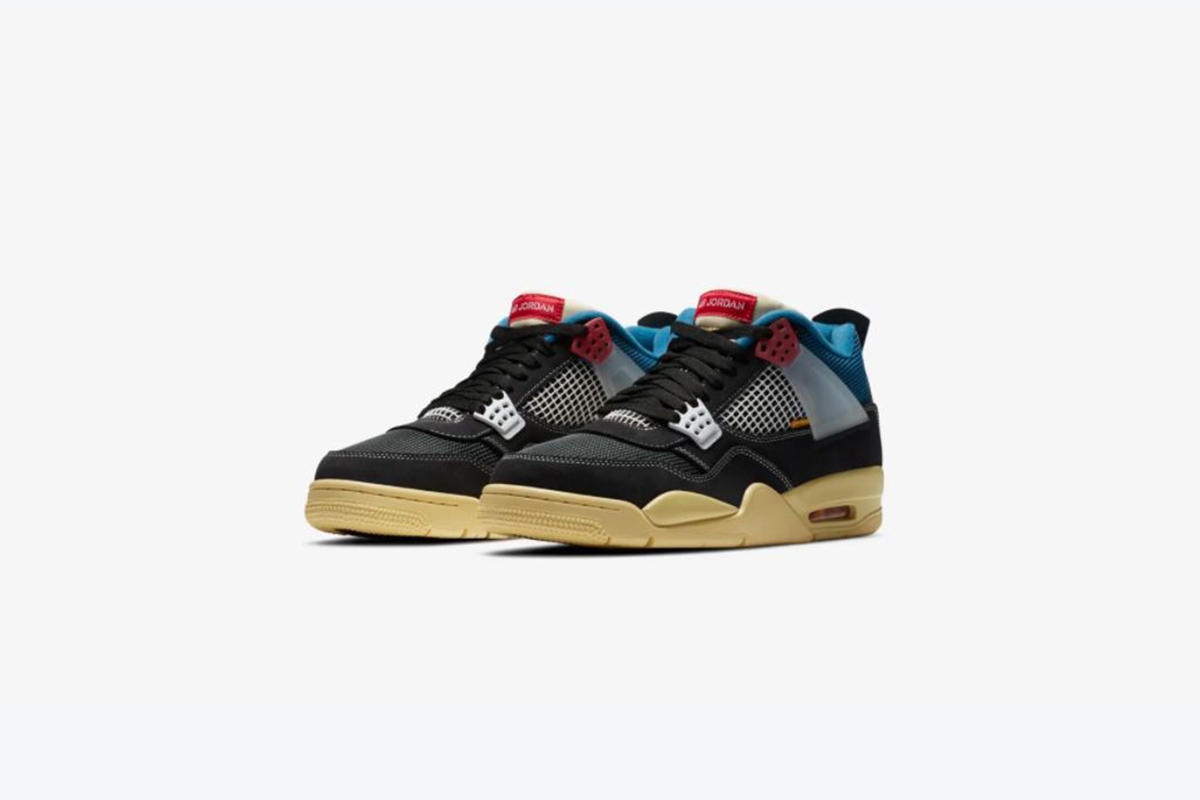 UNION LA and the Air Jordan Brand has teamed up in 2020 and presenting us the UNION x Air Jordan 4 "Off Noir". The black sneaker with blue lining and a cream-colored sole tells the story of UNION LA owner Chris Gibbs. As a child, Gibbs played basketball in the Air Jordan 4. However, the long tongue of the sneaker bothered him. That’s why he always turned his tongue around so that it didn't always rub against his shin. He now transferred this way of wearing the sneaker to the collaboration, where you can find a sewn on tongue from the box. In addition, a combination of robust suede and mesh was used for the upper. In general the sneaker reminds of the 80s and 90s and revive the vibe of those years. In addition to the black version there was also a pink version of the sneaker. This colorway was only available in their own UNION LA store. 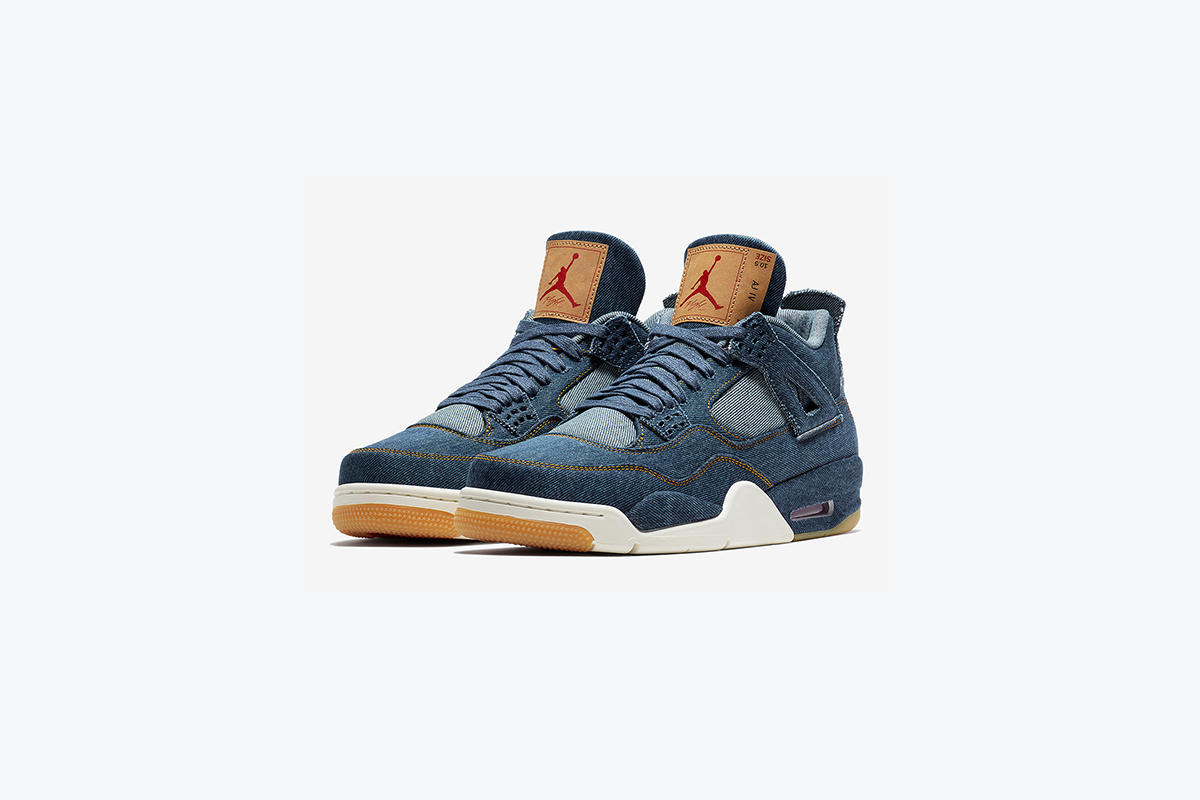 As the best-known jeans manufacturer, Levi's has teamed up with the Air Jordan brand to launch three Colorways in 2018: jeans blue, black and white. The Levi's x Air Jordan 4 are made entirely of the traditional brand's premium denim, except for some part of the sole. Even the laces are in denim and the Air Jordan patch on the tongue is made of leather, just like Levi's jeans.

And it still gotta be da shoes

To honor the legendary Air Jordan IV commercial from the late 80s, we decided to relive the vibe of this masterpiece by filming a sequel. After 30 years the Air Jordan IV is still one of the most popular sneakers and one with the greatest history. Big brands & great artists got their very own Air Jordan 4, but the OG still gotta be the best in the Game.