The ASICS GEL-LYTE III appeared on the market in 1990 and was a revolution in running. The ASICS GEL technology was built into the sneaker, which provides a unique running experience. Additionally, the sneaker impresses with its unique design. ASICS designer Shigeyuki Mitsui has completely dispensed with a tongue in this silhouette. Instead you find a "split-tongue". This combination of comfort, style and a sporty shape made the ASICS GEL-LYTE III the sneaker we all love. So, it is no wonder that many stores and designers have already immortalized their own creations on this silhouette. Also we, the AFEW STORE, had had the honor several times. But also stores like atmos or the designer Ronnie Fieg developed together with ASICS the most beautiful Colorways. 30 years after its release, the GEL-LYTE III is still an absolute hit among runners. 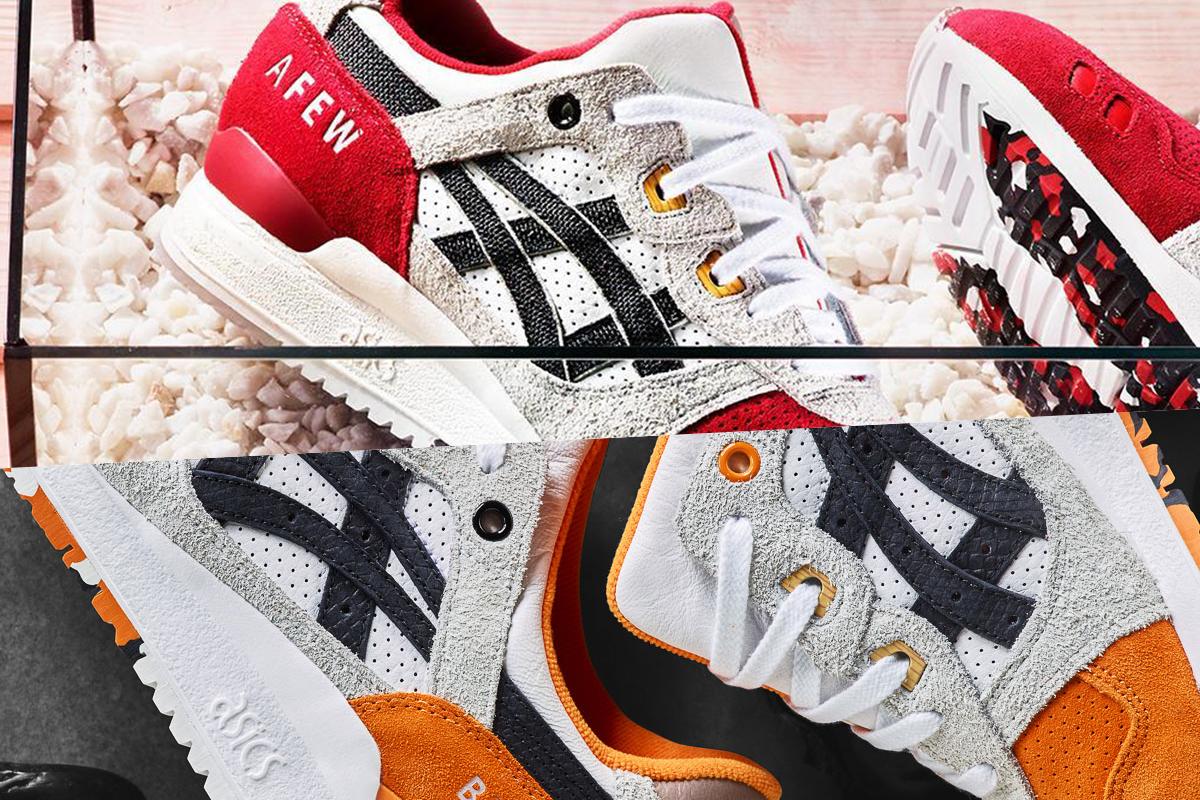 As part of the 25th anniversary of the GEL-LYTE III, ASICS decided to release one pair per month among Friends & Family accounts. As expected, we were part of it. Released as a 1-of-1 handmade pair in celebration of Japan Day 2012, the upper is dressed in buttery red suede and premium white leather. The silhouette boasts details on its back-medial and heel as well as light-grey and brown elements. Moreover, the Bento Box released instore was delivered with some awesome goodies – a booklet, extra laces (wasabi and soy sauce), dustbag and, of course, branded chopsticks. It did not stop there. Three years have passed, and the end of 2018 was marked by the release of the “Orange Koi”, however, in collaboration with BEAMS from Japan. Most of the pair is just like you know it, yet in orange instead of red. Further details include the names of both brands on the side of each shoe, together with its “Orange Koi” camouflage insole. The Special Box is delivered with a bandana, incense and a history booklet. Long story short: We are very proud and honoured to have the opportunity to make these two sneakers. 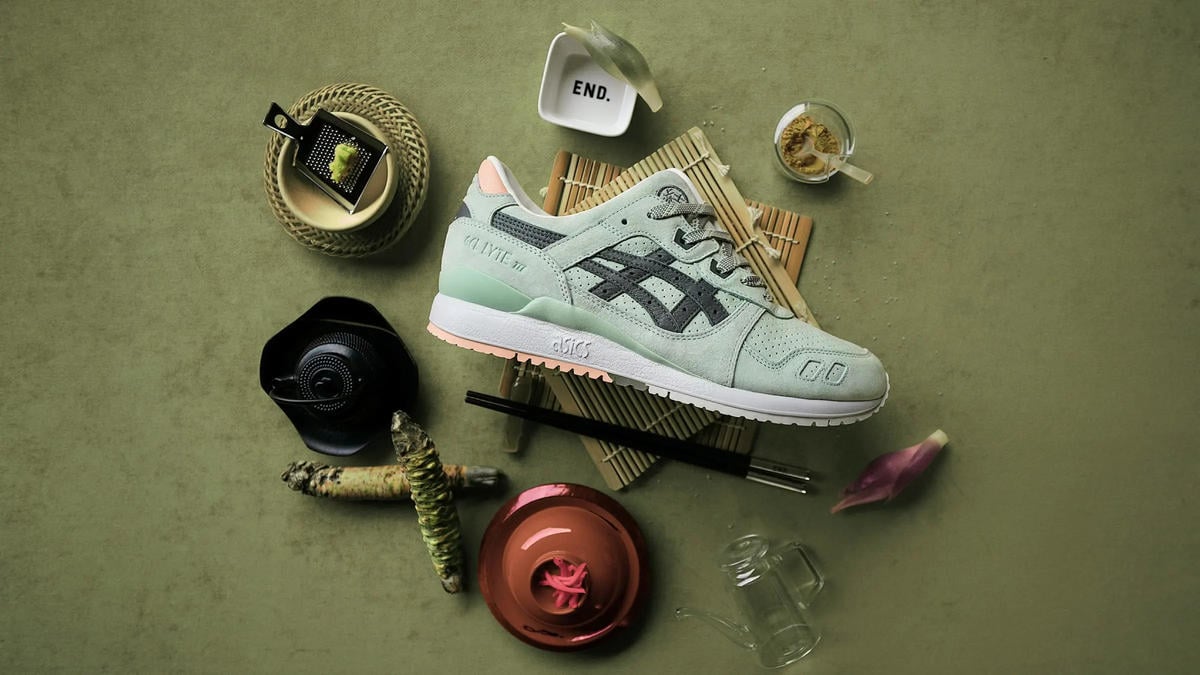 Founded in 2005, END. ’s first shop opened in Newcastle, United Kingdom. Collaborations with many different brands have been released throughout time, but there is one worth mentioning in particular: the “Wasabi”. This limited edition sneaker debuted in 2018, and the particular iteration of the GEL-LYTE III model is delivered in a green pigskin upper with “Gunmetal” brandings, inspired by the geographical locations where wasabi traditionally grows. The peach-coloured elements resemble traditional sashimi. Moreover, and to round it off, the Special Box released instore was accompanied by a branded wasabi bowl and a pair of chopsticks. When it comes to collaborations between sleek footwear and delicious food, this is certainly one of the best that has ever been made available. 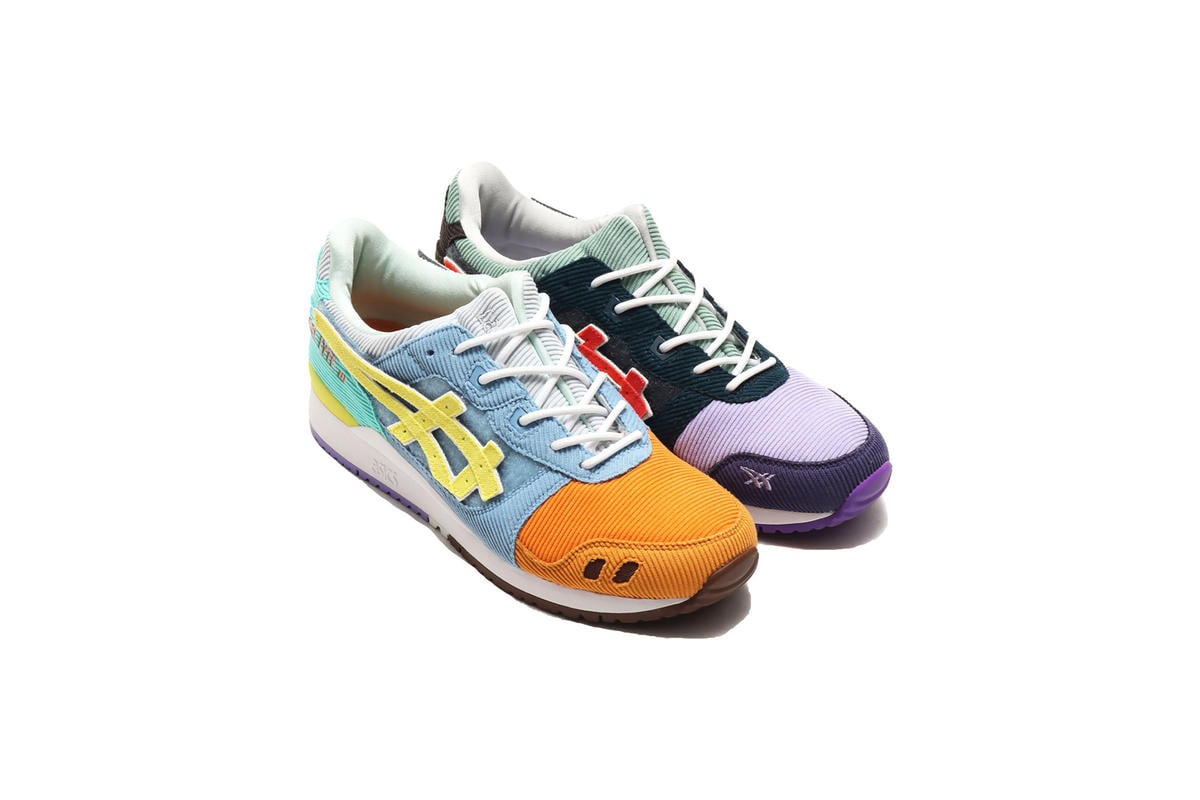 It all started in the year of 2000 in Tokyo, in a rather small location on a back street. Sure, we know that Atmos has had a long-lasting relationship with a lot of brands. One of them is, without a doubt, ASICS. Both Japan’s finest, they have created quite a few models that have seen the light of day, but in our humble opinion, the GEL-Lyte III deserves the spotlight. We can start in 2015, where the “Birthday Dinner” debuted, boasting a premium leather upper with few but elegant details. Fast forward to 2016, the “Duck Camo” was made available with a black mesh upper and duck camo print on the upper, delivered with contrasting 3M laces. Later on, in 2019, out of nowhere, the “World Map” was released as well, featuring a map-like pattern, where every single pair has an individual random print on them, making them truly unique. In 2020, the collaboration with ASICS and Sean Wotherspoon hit the shelves. The mismatch sneaker has a corduroy upper, just as we would expect from Sean. As a special feature you get five different colored “Tiger Stripes” which you can replace on the side. 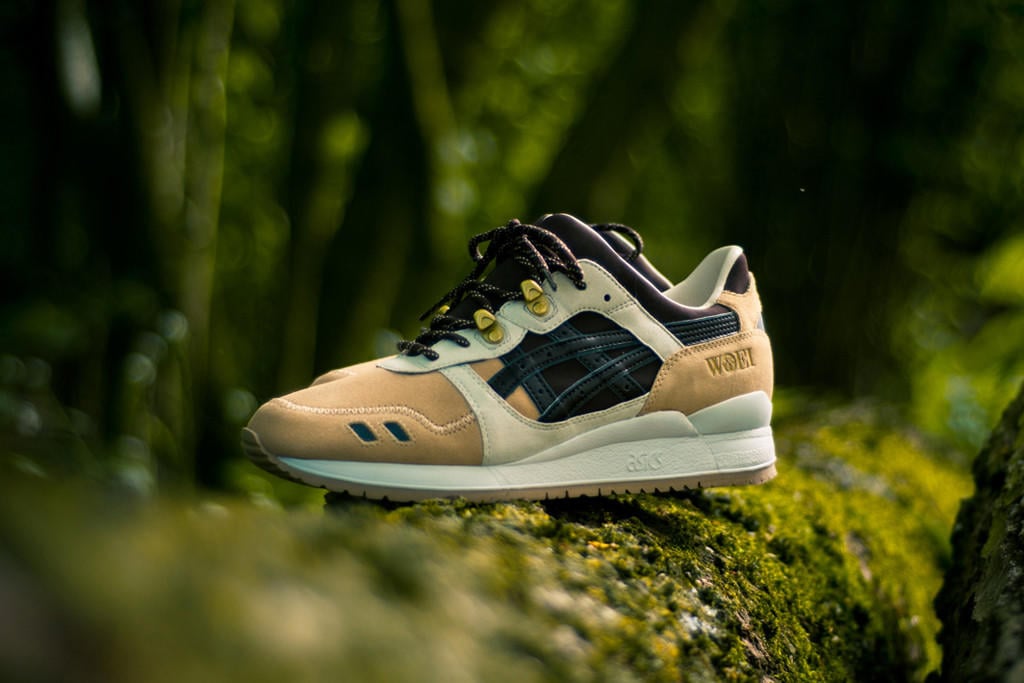 Celebrating WOEI’s 5th birthday in 2012, the Rotterdam’s shop merged forces with ASICS to release one of the most sought-after pairs of the GEL-Lyte III. The silhouette draws inspiration from the deer family found in Europe’s tundra region, hence its name: “Cervidae”. The upper is made of tan and white-ish suede and leather, respectively. Details like metal trail hooks, zigzag stitching and sophisticated 3M elements are worth mentioning. An instore special package was also available. As time went by, the “Vintage Nylon” debuted in 2010, celebrating the store’s 10th anniversary. This intriguing pair is inspired by the feel of an 80’s tracksuit and is dressed in salmon and grey. The upper is constructed using mesh and premium suede. To top it off, dual branded insignias are found at heel and back-medial. The pair was released together with an actual vintage-looking coach jacket. 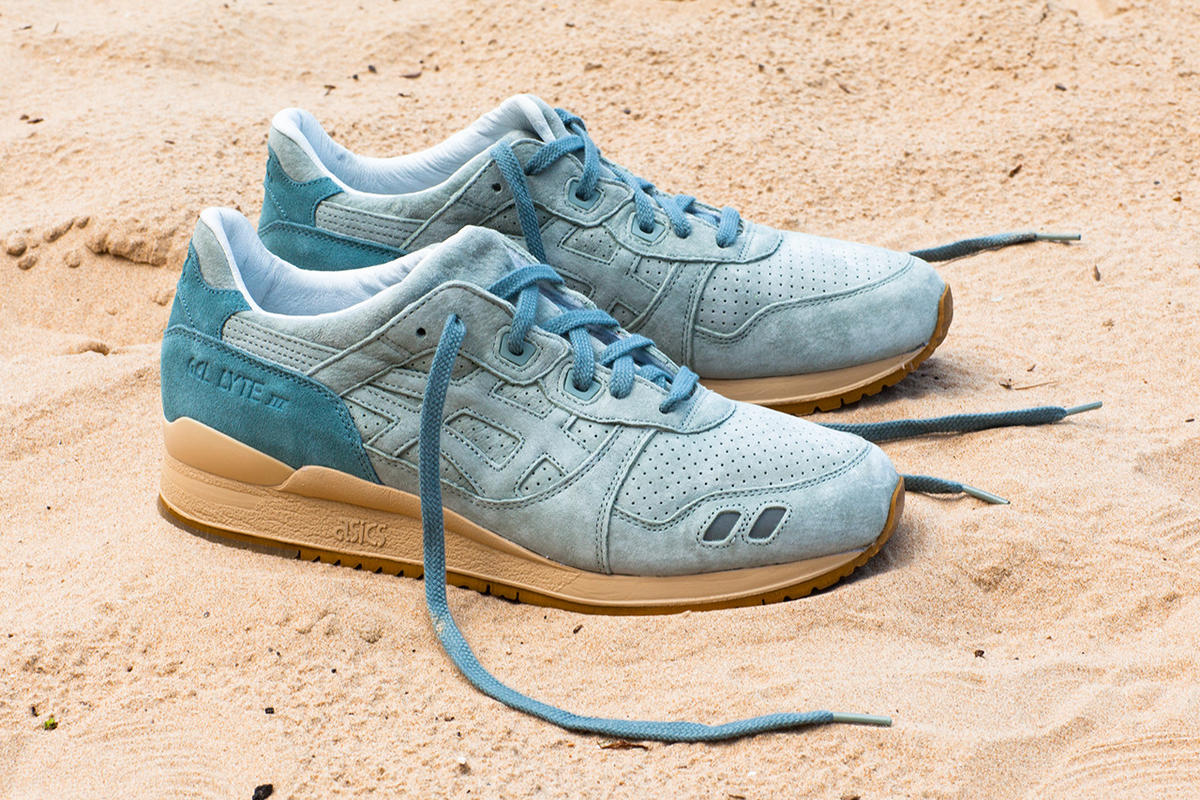 No doubt that ASICS was in top form during the year of 2013, releasing a great number of collaborative projects, especially the ones involving the one and only GEL-Lyte III model. The Chicago based St. Alfred brick and mortar store teamed up with ASICS to release the “Lake Shore” variant. The silhouette is dressed in premium and graceful buttery suede, having perforated details on the toebox and medial; 3M elements are also present in a bold, yet very discreet manner. Moreover, its GEL Cushioning System on the midsole displays a sand-like colorway, sitting atop a crisp gum coloured outsole. Subtle yet powerful, this par is a must-have for any avid ASICS collector. 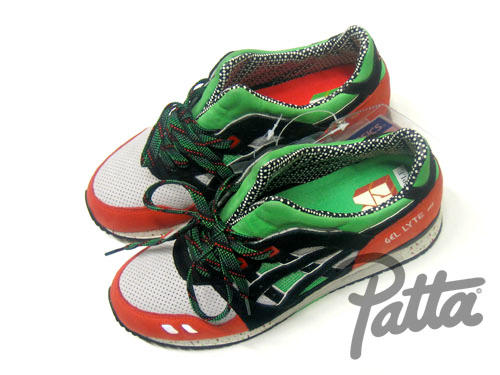 One of the very first collaborations coming from PATTA was, in fact, with ASICS. Up until now, the first GEL-LYTE III by PATTA is among one of the most collectible pairs of all time. Originally debuted in 2007, the PATTA iteration is inspired by Amsterdam’s Coat of Arms. The pair boasts a red mudguard and heel, perforated grey panels and black medials. The bright green on the tongue and nettings give them that extra pop. The “Amsterdam X” is present on the lining and extra laces as well. In addition, the pair sits atop a sprinkled multicolour midsole. As time goes by, the PATTA “Exclusive” GEL-LYTE III also released in brown hues with burgundy stripes. For once, everyone was able get a pair, as it was originally intended by the PATTA team. 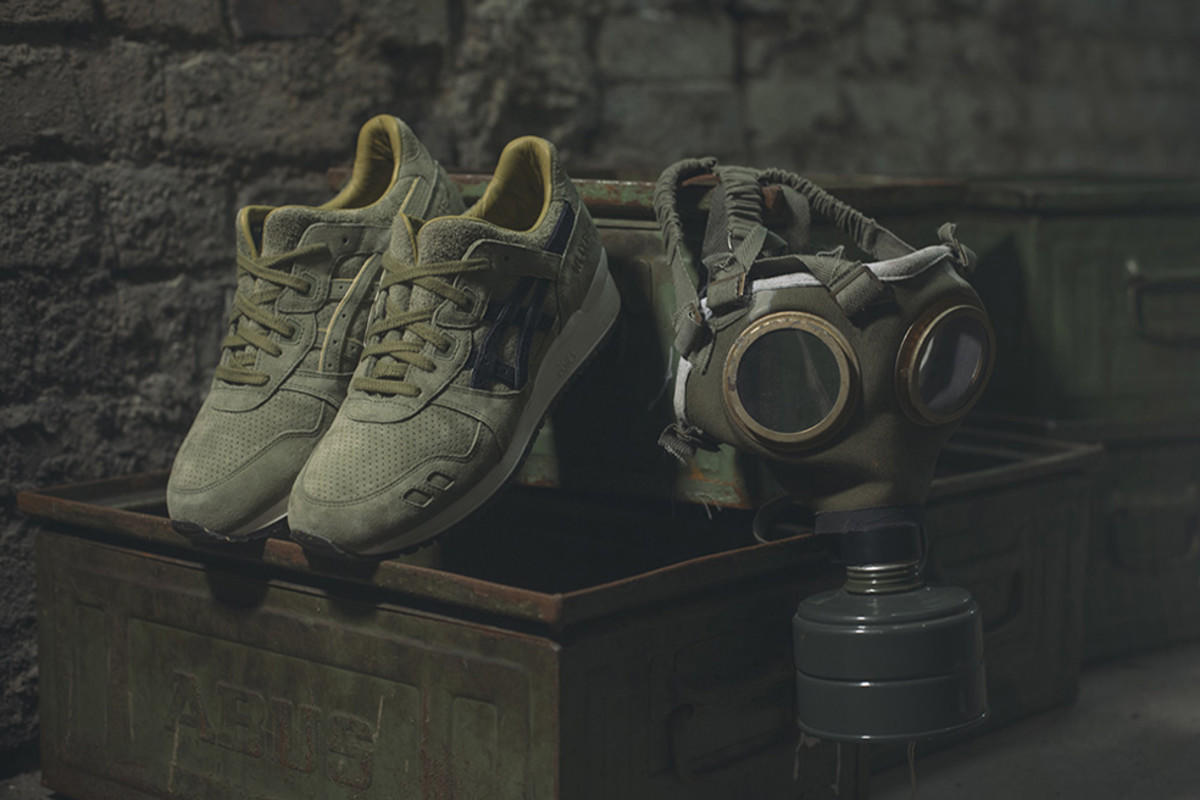 Celebrating the 25th anniversary of the GEL-LYTE III, Footpatrol tackles the classic silhouette with an out-of-this-world special release. Debuted in 2015, the design is based on the gas mask itself, the shop’s logo. After all, it symbolises tough times the Englishmen have been through during WWII. On the other hand, the silhouette gathers further inspiration from the time when people came together to overcome sorrow and hardship. The upper of the “Squad” displays a rich-olive hue, perforated toebox as well as gold and black detailing. The asymmetrical tiger stripes are also a very well-balanced element, making them stand out. Not every detail can be looked at with the naked eye: the Morse Code on the laces spell out “Footpatrol GEL-LYTE III”. Long story short, these are one of the most coveted pairs of GEL-LYTE III, ever. 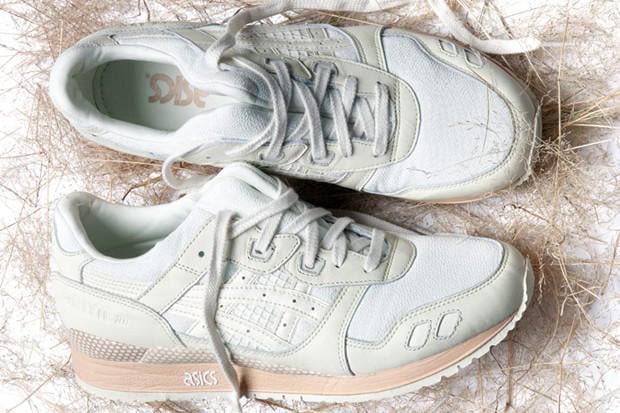 Everyone knows that ASICS has pulled off some great collaborations during past years. We feel obliged to mention the Zillion partnership, released in 2011. Recognized by its unique graphic prints and textiles on apparel and accessories, David Guarino has taken a more subtle and sober approach this time around. The silhouette displays ivory hues on the upper, delivered with one very particular detail; the toebox and medial are made from Chirimen, the material that is also used to create ceremonial kimonos. A complete package boasts Zillion laces and a one of a kind wooden hang tag. For that lowkey extra pop, these sit atop a peach midsole. 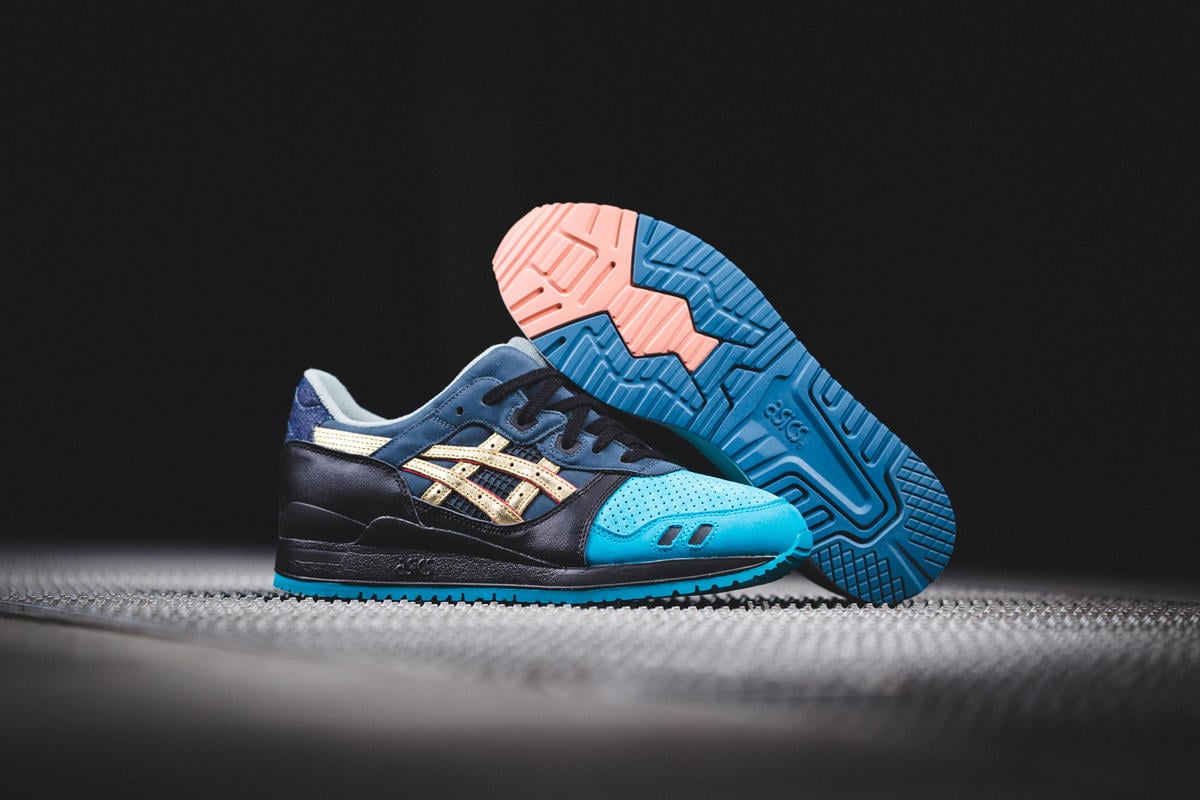 Since early stages, Ronnie Fieg has been involved with ASICS and, of course, David Z. The year of 2007 marks the release of the “252 Pack”. Back then, it was something no one was expecting, and, in all honesty, it gave more meaning to the word “collaboration”. From then onwards, we have witnessed the release of the “Solid Gold” and “Stainless Steel” iterations, both extremely flashy. Also, Fieg had partnered up with Nice Kicks and Highsnobiety for the release of some GEL-LYTE III. From 2010 onwards, he started to apply further twists to the GEL-LYTE III, such as the “Culture Shoq” collaboration, the “Coves” or even the Nice Kicks 2.0. The GL3 was never forgotten, as the release of the “Leather Back” and “Salmon Toe” confirms. In fact, the true hype started in 2013, at some point, with the release of the “Knicks”, “Miami” and “Flamingo” colourways. After the debut of the “Homage” in late 2015, other projects worth mentioning are the Super Green, the GEL-Lyte 3.1, Militia and, of course, its latest 252.2 Pack.